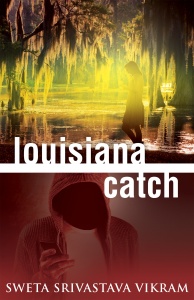 A grieving daughter and abuse survivor must summon the courage to run a feminist conference, trust a man she meets over the Internet, and escape a catfishing stalker to find her power.

Ahana, a wealthy thirty-three-year-old New Delhi woman, flees the pain of her mother’s death, and her dark past, by accepting a huge project in New Orleans, where she’ll coordinate an annual conference to raise awareness of violence against women. Her half-Indian, half-Irish colleague and public relations guru, Rohan Brady, who helps Ahana develop her online presence, offends her prim sensibilities with his raunchy humor. She is convinced that he’s a womanizer.

Meanwhile, she seeks relief from her pain in an online support group, where she makes a good friend: the mercurial Jay Dubois, who is also grieving the loss of his mother. Louisiana Catch is an emotionally immersive novel about identity, shame, and who we project ourselves to be in the world. It’s a book about Ahana’s unreliable instincts and her ongoing battle to deter­mine whom to place her trust in as she, Rohan, and Jay shed layers of their identities.

Cheryl’s Book Nook hosts a unique excerpt from Louisiana Catch to give you a quick taste.

Instructor’s Manual for Louisiana Catch, great for classrooms or book clubs too!  Includes recipes for several dishes mentioned in the book.

“Louisiana Catch is a triumph. In Ahana, Sweta Vikram has created an unforgettable character, strong, wise, and deeply human, who’ll inspire a new generation struggling to come to terms with their identity in a world of blurring identities.”
KARAN BAJAJ, New York Times bestselling author,
The Yoga of Max’s Discontent

“In Louisiana Catch, Sweta Vikram brings life to the complex human rights issue of violence against women. Through one woman’s journey to make sense of her past and ultimately heal, Vikram shows us that yoga can reconnect us to ourselves, and that by empowering others, we transform our own lives.”
ZOË LEPAGE, Founder, Exhale to Inhale

“Louisiana Catch perfectly captures what it means to be human in a digital world, where support groups meet online, love interests flirt on Twitter, and people get confused with personas. Equal parts tender and playful, moving and hopeful, Vikram’s prose connects us with timeless truths about grief and redemption in a satisfyingly modern way.”
STEPHANIE PATERIK, Managing Editor, Adweek

“Louisiana Catch is perfectly relevant and lovingly bottom lines the urgency to become involved in the feminist agenda. All the while being a deliciously romantic and hopeful story. Sweta proves, yet again, her ability to illustrate all the nuanced layers of a women’s experience and honor her power to create change in the world.”
PALLAVI SASTRY, Actress (Blue Bloods)

“Across the pond, poet Sweta Vikram’s second novel, Louisana Catch is timely in the wake of #MeToo.  A grieving daughter and abuse survivor must summon the courage to run a conference to raise awareness of violence against women. We’re huge fans of Vikram’s poetry, where she deftly handles big themes and issues, and expect no less from this novel.”
FARHANA SHAIKH, The Asian Writer, “Books to Read in 2018”

“It is to her considerable credit—and our good fortune—that Sweta Vikram has written a book so appropriate, and relevant for today. Of course, Louisiana Catch is ultimately to be commended because it also achieves what all successful narratives must do: it takes universal themes (loss, grief, identity, resolve) and explores them through characters who are real. Vikram has written a humane book about actual human beings, and if that’s not something to savor, and celebrate, in a world that’s increasingly sound-bite sized and ephemeral, I don’t know what is.”
–SEAN MURPHY, author, Please Talk About Me When I’m Gone

“I would recommend this book to anyone who needs a real and raw, compelling story to read. The protagonist will be one you will always remember and this book will constantly be on your mind-yes, it is THAT good. This book is great for readers who are interested in human relationships, social issues, identity, strong woman, the role of healing in shaping our lives and the impact of social media networking.”
— CHELSA LENA GIRARD, BiblioBeautyBooks

“This is on several levels a remarkable novel, a book for our #MeToo age. It addresses the recurrent major themes of women’s fiction–events centered around marriage and friends, the search for happiness, showcasing a strong woman who overcomes multiple obstacles – but it goes beyond them, adding a new twist that makes this book a not-to-be-missed read, including for those who do not normally read in the genre. You are in the hands of a professional writer and a remarkably talented storyteller. This is definitely a page turner.”
— CLAUDE FORTHOMME, Bestselling author of Gateway to Forever

“All the characters in Louisiana Catch seem so fleshed out and genuine and relatable—human, in other words. Everything they do or say is something you’d imagine yourself doing or saying if you were in their position or situation or culture. I think that’s very important when a protagonist you’re reading about isn’t otherworldly or perfect but relatable to you.”
— NADIA GERASSIMENKO, Luna Luna

“I can’t think of a better day to talk about this book. Louisiana Catch by @swetavikram should be on every woman’s coffee table. This is the kind of book ALL women should take the time to read and appreciate. Ahana makes you want to be better. She makes you want to stand up and fight. She learns to love again. (Rohan is perfection) She learns to be who she was meant to be… and that alone is AMAZING.  #InternationalWomensDay2018 #BeLikeAhana”
— GIOVANNA BOVENZI CRUZ, Beauty and the Books

“Louisiana Catch is an extraordinary story clearly defining the line between love and lust, adherence and violation and reciprocity and rape in a relationship.  She has used very expressive language in building up the characters in the story and has succeeded in sending her message to all who care about women’s struggle.”
— ANIL SHRIVASTAVA, The Think Club Quarterly

“Begun years before the emergence of the #MeToo movement, it brings readers into the life of an intensely conflicted young woman who is recovering from years of abuse, marital rape and shame. Like the #MeToo movement, this novel also asks serious though silent questions of readers. As women claim their power and independence in western culture, how do they assess and transcend their previous complicity in the abuse they endured without themselves becoming aggressors?”
— RICHARD A. “RED” LAWHERN, Ph.D., Co-Founder and Corresponding Secretary,  Alliance for the Treatment of Intractable Pain

“This story could be one written about any woman with an extended family that keeps her grounded. Yet, the beautiful details of the Indian family that it centers on feel like your own. Vikram has written the exact woman centered novel needed in our current times. The movie style writing would translate into a screenplay easily, and I would love to see that movie.”
—  INCIDENTAL REVIEWS

“After reading Louisiana Catch, I felt elated for Ahana’s happiness and her ability to seek courage during her times of adversity. To me, Ahana represents the bravery of women coming forward about their experiences, especially in the wake of the #MeToo movement.  I encourage everyone to purchase Sweta’s book. You will not be disappointed.”
— DIANA R. CHIN, Bruja Writer & Plus-Size Lifestyle Blogger

“Louisiana Catch is an emotionally immersive novel about identity, shame, and who we project ourselves to be in the world. It’s a compelling story about Ahana’s unreliable instincts and her ongoing battle to determine whom to place her trust in as she, Rohan, and Jay shed layers of their identities. An extraordinary and entertaining read from cover to cover, Louisiana Catch is unreservedly recommended.”
— JAMES A. COX, Midwest Book Review

“Vikram writes about the abuse and scorn women go through so well that it breaks my heart. But it is very eye opening. Just to follow Ahana in her journey was tough to read. But all the hardships that she goes through shapes her into the strong woman she becomes at the end of this book.”
— JESSICA BRONDER REVIEWS

“[Louisiana Catch is] a great book for women that have been abused in any way, discriminated against and a great way to understand the warning signs of someone like Jay. A great book to help promote NO EXCUSE for violence in all women.”
–FRAN LEWIS, Book Pleasures

“Louisiana Catch is a thoughtful contribution to the examination of a couple of societal issues, one as old as time, domestic violence, and one quite recent, online deception.  …I enjoyed watching Ahana find her sense of self and a new direction for her life.”
— LEILA TAYLOR, Buried By Books

“Raw, real, and profoundly moving, this is a very fine novel that begs for continuation in the form of a series. Sweta’s honors are well earned.”
— GRADY HARP, San Francisco Review of Books

“Through the story’s progression, readers witness a sort of social and personal growth of Ahana, who transforms from a protected woman to one who suffers through the harsh realities of life. This book will be a welcome addition to modern-day discussions of women’s rights, multiculturalism, and online technologies.”
— SAADIA FARUQI, New York Journal of Books

“Vikram’s deeply humanistic story blatantly exposes the problems posed by identity shame and projected images, and does so in a writing style that is superbly readable and was thoroughly enjoyable, even when difficult to read.  As an avid reader of self-help books,  I would recommend this novel as an inspirational tale for women and for those who find themselves mired in a world of social media.”
—JILL-ELIZABETH ARENT,   author