ReaderViews reviews Are You Rugged? 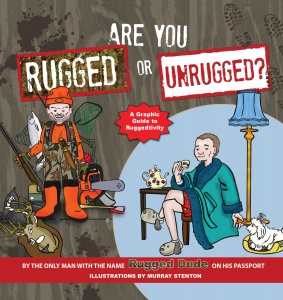 Are You Rugged or Unrugged?

“Are You Rugged or Unrugged?” by Rugged Dude Carson is a humorous book which includes scenarios in which you are judged as either rugged or unrugged (according to Rugged Dude Carson). Examples of scenarios include getting a cat instead of a golden retriever = unrugged but removing your artificial leg to use it to kill an attacking wolf = rugged. Another example is if you own even one Hawaiian shirt you are unrugged, but if you use your skinning knife to cut your steak at Outback Steak House you are definitely rugged.

Writing from experience, Rugged Dude Carson has spent many years of his life being rugged and has shown the world his ruggedness through TV shows and magazines. I enjoyed testing my level of ruggedness, which is safely on the unrugged side of the scale (I would totally rather have a cat than a golden retriever). I have respect for those people who are rugged, but it’s not for me.

Regardless of being rugged or unrugged, this book will put a smile on your face and maybe some faces in your head of people you can picture in your own life who would fit in these scenarios. The pictures are just as great to look at as the text is to read, as the illustrator has included quirky facial expressions on the characters, and the illustrations overall are laughable and very easy to picture happening in real life.

This can be a fun coffee table book for many to enjoy, or one that gets passed around a group of friends to first determine your rugged level, then provide examples and tips to help anyone who wishes to increase their level to a full-blown rugged dude(ette). “Are You Rugged or Unrugged?” by Rugged Dude Carson is a very entertaining, worthwhile book!