Historical fiction is not always about wars and dynasties or romance tales set in times of kings and knights. Sometimes it’s more about the story of a place seen through the eyes of characters. In Deborah K. Frontiera’s Superior Tapestry: Weaving the Threads of Upper Michigan History (Modern History Press, 2021), these characters are the constituents of the place itself.

The award-winning author of several books, including Living on Sisu, Frontiera mixes natural science and geology into history to create a book of stories that show the historical evolution of Michigan’s Upper Peninsula. Written for general adult audiences, this collection of Frontiera’s short stories take the point-of-view of trees, rocks, rivers and artifacts to create a unique experience of regional history and story-telling. 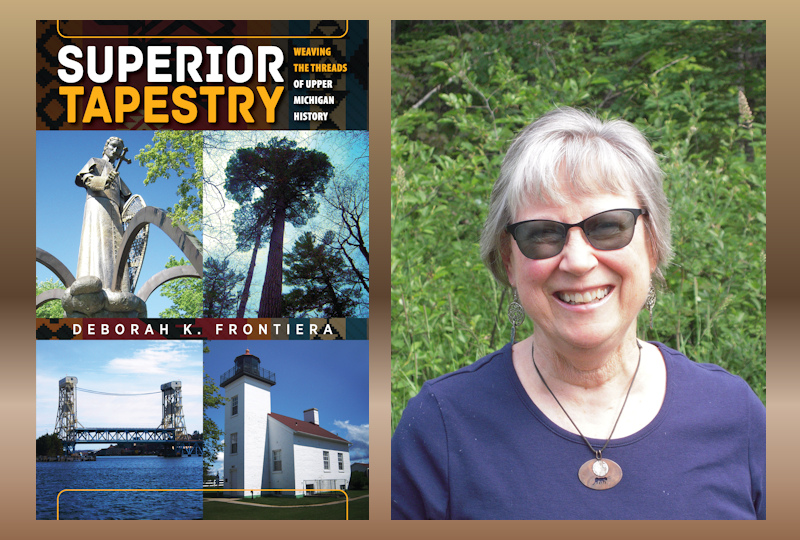 So why the title ‘Superior Tapestry’?

“I had the idea that events/things in history are connected together and the idea of weaving a tapestry was a good metaphor for that,” the author explains.

Frontiera feels that nonfiction sometimes can be a dull read. So she chose a narration that would let objects come to life and tell their stories is a fun way to draw in readers, especially young people. She says she had tried that with a previous short novel, Midnight in the Pawn Shop, which was well-received.

Growing up in Lake Linden, Frontiera feels rooted deep in the land.

“As a young person, my father filled my head with UP history, which at that time I ignored–like most teenagers,” she remembers. “I lived away for many years, but my husband and I always returned to visit Grandma and Grandpa in the summer and I found myself telling them the same stories.”

Over the past five years, the Modern History Press has exploded onto the publishing scene of the Upper Peninsula. It has featured leading U.P. writers including historian and photographer Mikel B. Classen whose Points North: Discover Hidden Campgrounds, Natural Wonders, and Waterways of the Upper Peninsula won an award from the Historical Society of Michigan. The annual U.P. Reader anthology serves as a unique venue for showcasing the talent of U.P. writers, including young writers in U.P. schools from grades 5 through 12.