Up Colony: The Story of Resource Exploitation in Upper Michigan – Focus on Sault Sainte Marie Industries by Phil Bellfy 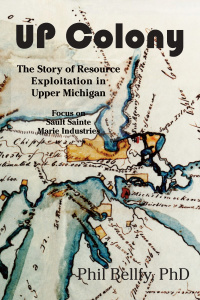 In the 1980s the author headed north and attended Lake Superior State University at Sault Ste. Marie, Michigan.  As a student he was struck by the differences between the sister cities on either side of the St. Mary’s River. The American Soo was clearly in decline while the Canadian Soo prospered. The question why turned into a master’s thesis that grew to include an examination of the economic woes of Michigan’s U.P. This short book includes the original thesis and a 20-year update of the manuscript.

For a book of only 70 pages, it is filled with eye-opening facts that clearly show that the U.P. was treated as if it was no better than a colony in which the colonizing country systematically exploited its enormous wealth then left it one of the most poverty-stricken areas in the country.

By 1940 the U.P. yielded $1.5 billion in copper and paid out $350 million in dividends. Another $1 billion was produced by deforesting the peninsula, and $4 billion in iron was dug from the U.P.  But as the author shows, none of that vast wealth stayed in the peninsula. All of the profit went East or South to enrich owners and shareholders of the mines and lumber companies. The result was that in 1960 there was 16% unemployment in Appalachia and 30% in the U.P. In 1920 the U.P. had the worst roads and the state’s highest illiteracy rate. Magnifying the lack of public services, including poor schools, were state laws that exempt certified commercial forests, and iron ore deposits from taxation which meant that local governments didn’t get enough tax dollars to provide basic services.

The state built the first locks at the American Soo and charged boats for its use. Then the U. S. built bigger locks and allowed boats free passage. The locks didn’t serve the Soo, just moved raw materials through the area and left no profit. The first railroad was built not to serve the city but to move materials to and from Canada. Throughout the last century manufacturing jobs vanished in the American Soo and the population dipped to 14,000 by 1970. Sixty percent of the population’s income came from Social Security. Yet the Canadian Soo had grown and prospered because the area’s natural resources were the sources of local manufacturing jobs including steel plants, paper mills and a variety of secondary businesses that took advantage of regional resources. And all the while the UP’s $4 billion in iron ore and the profits from it went out of state.

Being a master’s thesis, U.P. Colony does contain some scholarly jargon and terms, but they do not distract from the importance of this report on the economic history of the U.P. and how our beloved Upper Peninsula became a victim of the dark side of Capitalism.